Hi, my name is Krista Whitaker. I am a student Gallaudet University and short-term missionary at CCCD – Kingston. I first came to CCCD – Kingston last year, in June of 2016. It was my very first time out of the U.S. and my first missions trip as well. When I first came to CCCD, I had no idea what to expect. I had never done anything like that before. But, I am so glad God didn’t let that stop me from obeying His call. He has since called me to serve two times at CCCD. He has taught me so much and provided me with amazing experiences during those times.

Surprisingly, I actually never intended to serve at CCCD. In fact, I had never even heard of it until a couple years ago. But, as it says in Proverbs, “In his heart a man plans his course, but the LORD determines his steps”. A couple years ago, as I was finishing up my Associates at my community college, I began to look for options for serving within the Deaf community. After some research, I had found a Deaf ministry program that would be held during the spring semester in Iowa with an organization called Deaf Missions. Thinking that would be a great opportunity, I pursued that pretty diligently. But, God had other plans. A few months before the program was to begin, I was informed that they were shutting down the program. I felt lost. I thought that was what I was supposed to do and now I had no plans for the whole semester. Thankfully, I had remembered seeing a video on YouTube from a person who had gone on a missions trip to CCCD and decided to try. Long story short, I’ve served at CCCD for two summers now and I hope to continue to serve in the years to come.

As a short-term missionary, I was involved in various different roles and activities.

During the last few weeks that school was in session, I served as a substitute/supporting teacher. Whenever a teacher couldn’t be there or they needed something done, I was there to fill in. Throughout this time, I was able to do many different things. Create charts and exams and teach different classes for pretty much all grades. One of my favorite memories, however, was playing Jeopardy! With the students. One day, during the last week of school, one of the teachers could not make it back. So, I was asked to look after her class. Since official classes and exams were over, there wasn't anything for me to teach or to do. So, I decided to try to set up a game of Jeopardy! (which they had never actually played before). I found a notebook with exam material in it which I used to help me with the questions and categories. I chose four categories: math, social studies, office administration, and Bible. Since it wasn’t really a serious day of class, the students who wanted to participate (about half of them) were then separated into two teams and then we began.  If you've ever seen the game Jeopardy!, you can imagine how the game goes. Since Jeopardy! is one of my favorite games so I enjoyed this activity very much. The students did too. By the end of the game, all of the students were involved. It was great seeing them all excited about using what they’ve learned to compete against one another.

While I was at CCCD, I was also able to gain experience through being in the coffee shop. First, I helped a couple of the older girls bake things to sell. I introduced them to streusel muffins and we semi-invented a chocolate marble cheese cake. We worked all afternoon and evening (I think we finished at 11pm) baking muffins, brownies, and cheese cakes. Everything turned out very good. Second, I got to help with things like stocking, sorting, and just watching how everything is done. Lastly, (and maybe most important) I got to taste some of the delicious creations that Deaf CAN! offers. In fact, I had the opportunity to have my first taste of coffee. First I tried a latte and then an affogato (ice cream and espresso). It was interesting. After that, I pretty much stuck with their smoothies and milkshakes. Overall, very good stuff

Throughout my time in Jamaica, I was fortunate to have the opportunity to travel to many of the neat places that the island has to offer. I went to Y.S. falls, Reach falls, Devon House, Bath Fountain, Lyssons beach and a few others. Probably my top two favorite places to visit, though, were Top Hill and JDV. Yes, the waterfalls were great. But there’s something about being with God’s people while being surrounded by His beautiful creation.

On a Sunday in early June, I was able to go to Top Hill in St. Catherine and visit the Deaf church there. This was a great experience and I really enjoyed it. Although I have been to Deaf churches before, this experience was slightly different. This is because, in that part (the country sides) of Jamaica, more people use what is known as country sign than JSL. While country sign is similar to JSL, it is more condensed and gestural.  Because of this, it can be difficult to understand. So, because this church is in the country and because many of the deaf who attend use country sign, the service was held mostly in country sign. It was a little difficult to understand at first. But, after a while, I could understand most of it. The message was about the Good Samaritan, 1 Corinthians 13:13, and the importance of love.

After church, we followed Clark’s to see his coffee farm which was a short walk from the church. Clark is the man who inspired the boys at CCCD to start getting into coffee. It was really neat to meet the man who I’ve heard so much about and it wasn’t what I expected. Clark is an older man, about eighty. However, judging from his energy and liveliness, you probably wouldn’t guess. He showed us around his farm and all of the things he had – coffee, ackee, bananas, pigs, rabbits, chickens. A whole variety of things. After being away from the farm and country for about a year now, I enjoyed this trip very much and felt quite at home.

A few weeks later, a group of us went to St. Elizabeth to visit the Jamaica Deaf Village (JDV) for church. Church had already started so we just joined in. During the announcement portion of the service, they had us come up and introduce ourselves, then, proceeded with the sermon. Pastor Sheldon had a great lesson on Moses and not making excuses. Overall, I really enjoyed this experience. I have been to a few different churches before, some Deaf, some not. I have to say, there's nothing like being in a Deaf church. I really enjoy it. I don't really know how to explain it. It's kind of one of those things that you have to experience yourself (which I highly recommend if you ever get the chance).

So, what did I learn from all of this? I actually learned a lot. But, some of the biggest things I learned include: (1) things won’t always happen when and how you expect them. (2) It’s true what they say. No matter where you go, you have a community. Being a part of God’s family is amazing. Because, no matter where you go, you can always find brothers and sisters in Christ to worship and fellowship with. It is similar with the Deaf community as well. (3) It doesn’t matter how much or how little you do. God can use you whatever, however, whenever he wants. You just have to make yourself available. So, if you want to serve, go for it! You never know what God is going to do. 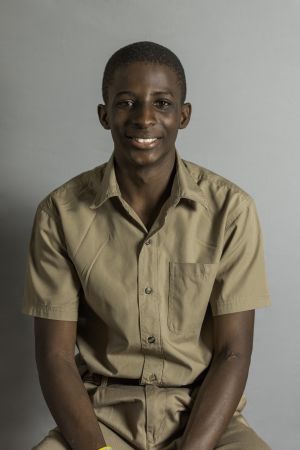 Want to be added to our newsletter list and receive updates throughout the year?

Caribbean Christian Centre for the Deaf is a 501(c)3 nonprofit organization. Your contribution is tax-deductible to the extent allowed by law.